One of the Finest Interpreters of the Great American Songbook 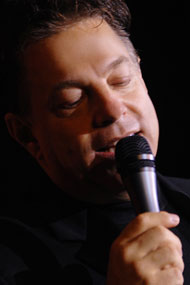 100 Years and Beyond – The Life and Times of Frank Sinatra

Steve Lippia has become one of the most prominent, in-demand vocalists and has quickly established his place among the finest interpreters of “standards” and traditional pop music in the nation. Steve’s youthful, has energetic talent, and his powerful show creates a perfect blend of “classic” with “today.” His show introduces a new generation to this timeless music while appealing to long-time listeners.

Steve has headlined highly successful, extended engagements in both Las Vegas and Atlantic City as well as the legendary "Birdland Jazz Club" in New York City. He performed in a successful European Jazz Festival tour and many prestigious gala events in the entertainment and business industries. His TV appearances include "Extra," FOX's "Good Day New York," CNN's "Showbiz Today," ABC, and the BBC. His much anticipated third CD, "Steve Lippia in Concert," was released in June of 2009 and was Grammy-nominated. Steve is currently working on a couple of new album concepts and hopes to be able to go into the studio soon.

In addition to his symphony performances, Steve has appeared at hundreds of performing arts centers, arts series, and festivals.

For more information or to book Penning and Langford for your next season or event, contact us!

"In my 20+ years of conducting Pops concerts across the USA and also Europe, I have never seen an audience rise to their feet as fast as they did for Steve. He literally had the entire crowd eating out of the palm of his hand."

"Many have said it was the best POPS concert they had ever seen anywhere in the country."

“I just wanted to thank you all again for a tremendous event…Working with Steve Lippia and the folks at Andersen was a joy!”